Sainthood cause opens for Eileen O’Connor

Sainthood cause opens for Eileen O’Connor 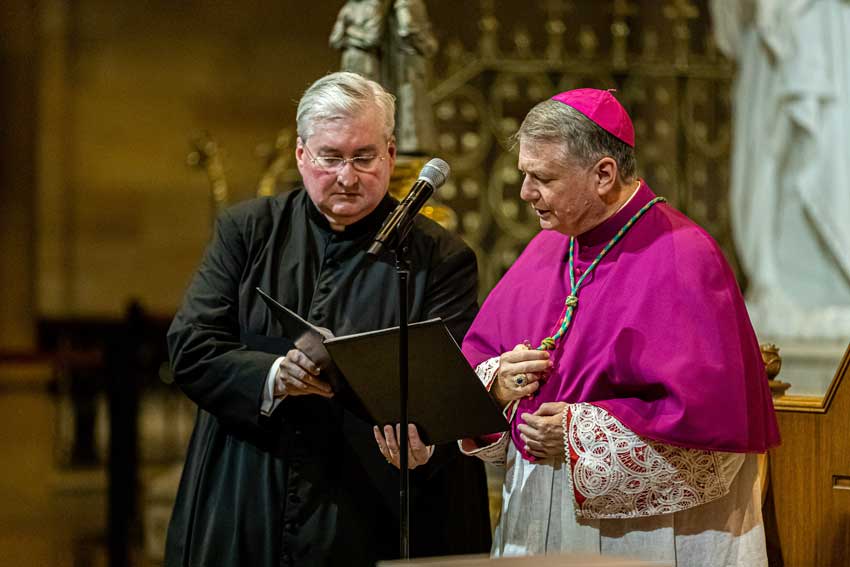 Archbishop Anthony Fisher OP takes an oath of office as the official head of the Sydney tribunal of inquiry into Eileen O’Connor’s cause. PHOTO: Alphonsus Fok

The joy was palpable when 1000 people filled St Mary’s Cathedral in Sydney for the official opening of the cause for beatification and canonisation of Australia’s next possible saint, Eileen O’Connor on 20 February.

Beatification is the first of two major steps to being officially declared a saint by the Church; Eileen has already been accorded the title ‘Servant of God.’

Born in Melbourne in 1892, Eileen Rosaline O’Connor suffered a broken spine at the age three and lived in in constant nerve pain from what was later diagnosed as tuberculous osteomyelitis.

She co-founded Our Lady’s Nurses for the Poor with local priest Father Edward McGrath msc in 1913 to care for the sick and dying poor in their homes. 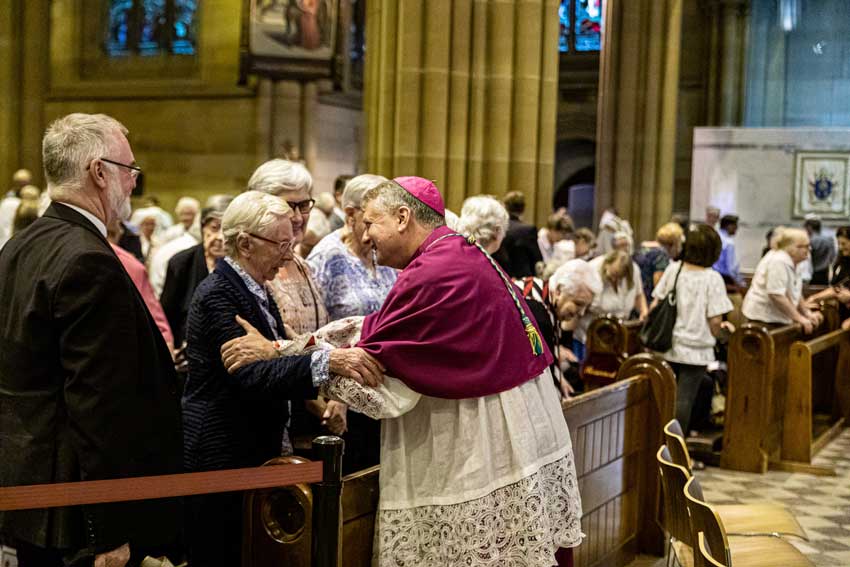 In his homily, Archbishop Anthony Fisher OP said God makes far more saints than are recognised, but that “the Church is graced to recognise a few”.

“For a century now the Church in Australia has kept alive the memory of the ‘Little Mother’,” he said adding that it has seen “many answers to prayers through the intercession of Eileen”.

“So far Australia has only one recognised saint so can we produce more saints?” he asked. “Has our dry continent suffered a holiness drought also?”

“We pray that Eileen O’Connor might be raised to the order of Australia’s second saint.”

The next steps in the process which would raise her to the altars, official confirmation of her reputation for holiness and indications from God [in the form of two miraculous healings], will require from Catholics ‘the patience of a saint’, he said.

“But we hope that day will come in our lifetime.” 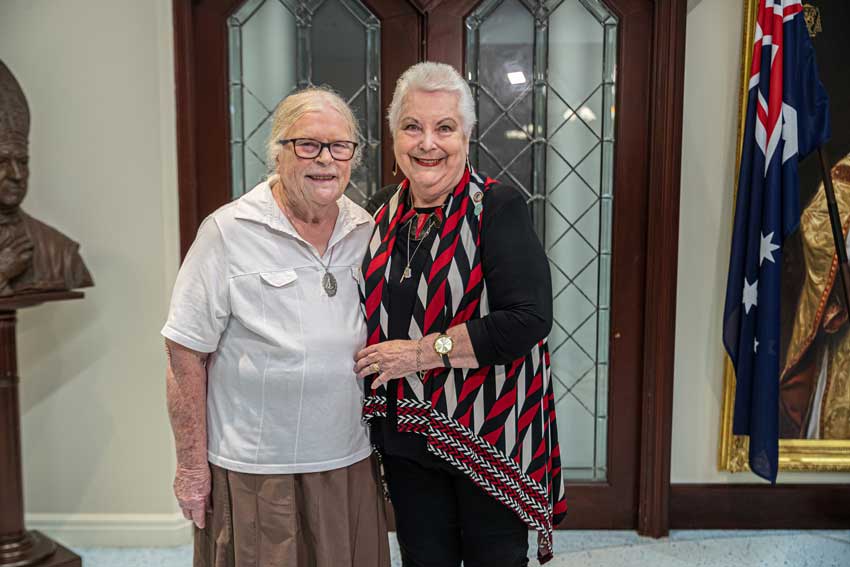 Childhood friends Sr Margaret-Mary Birgan andBarbara Bowers MBE at a reception following the Mass to open the cause of the co-founder of Our Lady’s Nurses for the Poor |  PHOTO: Alphonsus Fok

Present at the Mass were the members of Our Lady’s Nurses for the Poor, the congregation Eileen co-founded with Father Edward McGrath msc, their staff and friends, and families and staff from Eileen O’Connor Catholic College in Lewisham.

Also in attendance were diocesan, education, religious and civic leaders including representatives of the Sisters of Charity which administers the congregation.

The evening included a ceremony to swear-in Archbishop Fisher and his four Sydney-based delegates who will now prepare all of the material relating to Eileen’s life and reputation for the consideration of experts in Rome.

They are Fr Julian Wellspring who will chair the group, Fr Richard Waddell, Mrs Jenny Maloof and Mrs Maureen Fairbairn.

Eileen will only be given the title of Venerable, the next step in the process towards official sainthood, if – after the diocesan phase is completed – expert theologians and historians in Rome judge there is sufficient evidence of her reputation for holiness and a life of heroic virtue. 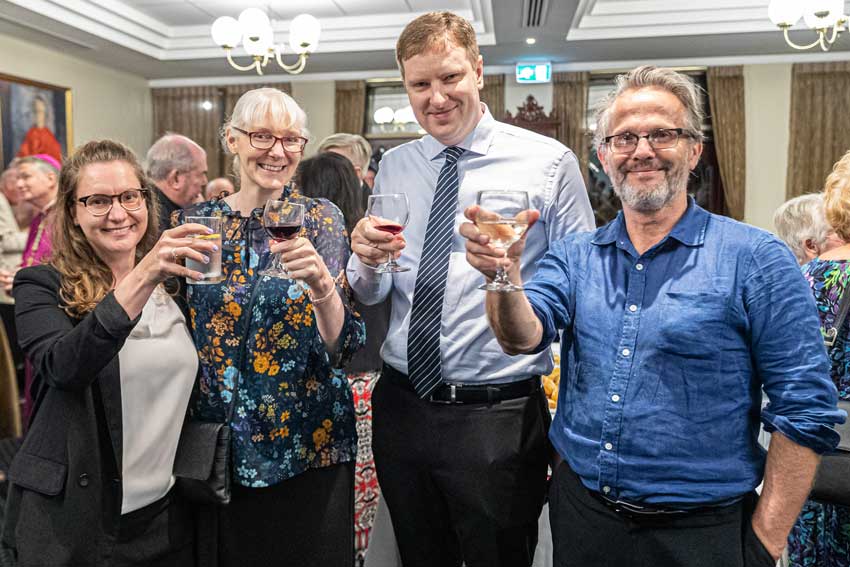 After this, a medically unexplainable healing  – a miraculous healing – must be proven to have occurred through her intercession before she is declared a blessed.

One further proven miracle occurring after that time will confirm her as Australia’s second saint. The official postulator guiding her cause, Fr Anthony Robbie, thanked Archbishop Fisher for his courage and devotion for kick-starting the process in 2017.

“We thank you from the bottom of our hearts”

“On behalf of those who have waited all these years we thank you for the bottom of our hearts,” he said.

He also thanked Bishop Anthony Randazzo for his “devotion and love” in his role as the initial investigator of Eileen’s cause and the Brown Nurses whose “luminous lives” of generous and selfless love manifest Eileen’s spirit. 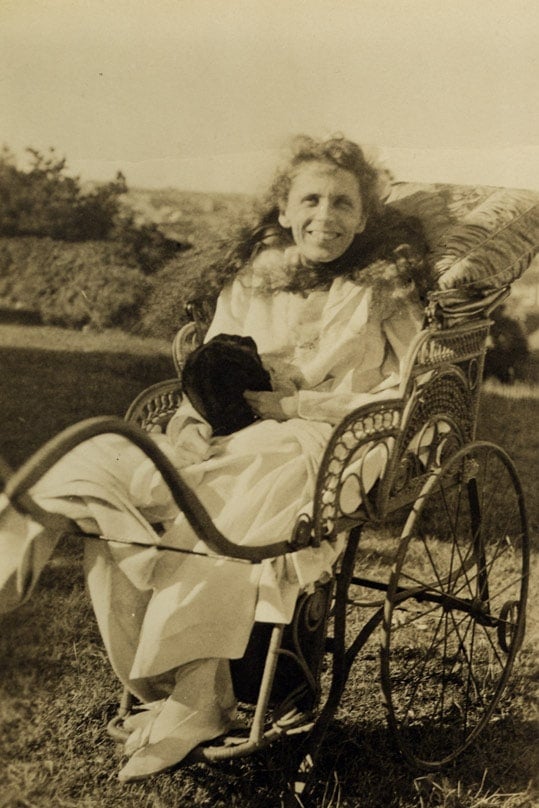 Despite a life of constant pain and illness, Eileen “never showed a trace of self-pity” says the postulator for her cause Fr Anthony Robbie. PHOTO: Our Lady’s Nurses for the Poor

He encouraged all present and those watching the live-streamed event to spread the word about Eileen among family, friends, the church community and wider afield.

“May we live to see the happy conclusion to the events we begin this evening,” Fr Robbie said.

Our Lady’s Nurses for the Poor’s Sister Margaret Mary Birgan oln told The Catholic Weekly Eileen was above all else “a very joyful person”.

“I’m just so happy that her little image has gone out on prayer cards all over Sydney tonight, and her name has gone before her,” she said.

Earlier in the day Fr Robbie told The Catholic Weekly that during time he has spent in Rome laying the groundwork for her cause’s official launch he has found Eileen to be “a very compelling, magnetic individual”.

“She’s a little person of this world in every visible way, [yet] supernaturally she’s a giant,” he said. “She exceeded the bounds of her human nature in the most wonderful way and brought happiness and light and life into the lives of so many people.

“And that’s never passed away.”

“So it’s a wonderful time for us. I just know Eileen would be stoked.”

If Eileen O’Connor is beatified she would be only the second Australian to be officially recognised in this way by the Church and would likely be on track to become the country’s second saint after St Mary MacKillop of the Cross.

Monica Doumit: Why Eileen is exactly the saint Australia needs
Where Love and Respect fill the Gaps